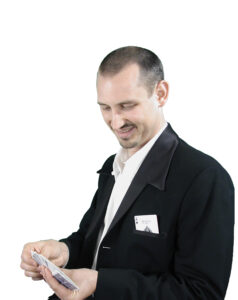 Our magical journey starts with a six-year-old boy. Intrigued by magicians of the past and present, he knew that magic would be his life. By age 11, he was

skilled enough to work and travel with an accomplished vocal duo. His popularity grew and so did his love for magic. It was this combination of undying love and devotion to the art of magic that allowed him to become known as Amore the Magician.

Amore now has over 25 years of professional experience and takes the art of magic very seriously. Amore has had the opportunity to perform in China, Bermuda, Canada, Puerto Rico, and across the United States. He has wowed and amazed some of America’s largest companies such as Deloitte & Touche, UPS, Burger King, Phillip Morris, WABC-TV, and Nabisco as well as many famous people including Harry Blackstone Jr., Muhammad Ali, Jay Black & The Americans, Mookie Wilson, Boomer Esiason, The New York Islanders, Johnny Maestro & The Brooklyn Bridge, Prime Minister Benjamin Netanyahu, Mayor Giuliani and The Royal Family of Brunei.

Always interested in the mind, Amore pursued a college education in psychology. He now holds a Doctorate degree in Clinical Hypnotherapy. Although Amore has the ability to use hypnosis for clinical purposes, he instead uses his ability to administer hypnosis in order to perform his hilarious comic hypnosis show.
He has also put his education to work by creating specialized educational programs for schools and libraries that incorporate magic and psychology. Amore always enjoys promoting the art of magic.

He has lectured and taught at many institutions including Hofstra University, Adelphi University, Queensborough Community College and Molloy College. His knowledge and experience came in handy when he set out to write the popular book Cluck Like A Chicken, Bark Like A Dog. Choreographing new routines for his own original shows was not enough and Amore reinvented himself once again, starring in the best selling educational videos, The Secrets of Stage Hypnosis Revealed and The Mysteries of Magic Video Workshop.

Amore loves to repay the community by providing his talents to many charitable organizations including The United Cerebral Palsy Association, Long Island Jewish Hospital and Winthrop University Hospital. Amore is a dedicated and passionate performer with numerous television appearances including News 4 WNBC, Intro To Life, L.I. News 12, Push Pause, The Lenny Defina Variety Show and Live with Regis & Kathie Lee. He has been featured in articles published in Newsday, The Daily News, local newspapers and has top billing at many resorts. Amore is considered one of New York’s top entertainers and his expertise and has made him a member of the most prestigious magic organizations in the world.
Hold onto your seats you are in for a magical ride…