Check out this published article on AXS.COM  Written by Meagan J. Meehan

Amore is a magician from Long Island, New York, who has over 25 years of experience as a professional entertainer. Amore has achieved a great level of success having performed for some of America’s largest companies and A-list celebrities. He has also been featured on numerous TV shows and is one of New York’s top-rated magicians.

Amore–whose real name is James Lazzarini–has been fascinated by magic since the age of six and by the age of eleven he had perfected his skills enough to comfortably perform them in public.  Continuing his love of magic into adulthood, Amore made a career for himself based entirely on his ability to amaze crowds. He has traveled to China, Bermuda, Canada, Puerto Rico, and all over the USA. Although he largely relies on his performance skills, Amore is also well educated having received pursued a college education in psychology. He now holds a Doctorate degree in Clinical Hypnotherapy and although he has the ability to use hypnosis for clinical purposes, he chooses to use his ability to perform his hilarious show.

Moreover, Amore has created specialized educational programs for schools and libraries that incorporate both magic and psychology. He enjoys promoting the art of magic and has lectured at Hofstra University, Adelphi University, Queensborough Community College and Molloy College. These experiences helped him when he penned his popular book titled “Cluck Like A Chicken, Bark Like A Dog” and educational-videos called “The Secrets of Stage Hypnosis Revealed” and “The Mysteries of Magic Video Workshop.”

Amore also repays the communities that he services by performing at charitable organizations including The United Cerebral Palsy Association, Long Island Jewish Hospital and Winthrop University Hospital. He has been featured in Newsday, The Daily News, numerous local newspapers and has enjoyed top billing at many resorts. Recently, he spoke to AXS about his experiences as a performer and his hopes for the future:

AXS: What inspired you to become a magician?

Amore:  I have been performing magic since I was six years old. Doug Henning was on Broadway and I was there to see it. My parents were great at exposing me to many live performances as a child. I certainly got the bug to perform at an early age.  I have to credit my Dad for the start of it all.  He loved watching magic so I received much support and of course lots of magic kits growing up.  It should be of no surprise that I was influenced by many great magicians both historic and contemporary, but my influences didn’t stop with magic. Other inspirations came from seeing both Broadway and off Broadway plays, comedy shows, stage hypnotist shows, visiting museums, amusement parks and even the wondrous puppet creations of Jim Henson played a part in my early performances. Hence my first show performed in my backyard to paying neighborhood kids was a magic and puppet show. It seemed that everywhere I looked I saw things that inspired me. It was fate that a magic shop named “Tricky Business” owned by Mario Gonzalez was in the neighboring town. Visits to the shop were often and I couldn’t get enough of this amazing thing called magic and illusion.

AXS: How did you find places to perform?

Amore: I am a professional magician and have been performing for over 25 years.  Early in my career I was chosen from an audition held in Grand Central Station to find a magician to work with the legendary magician Harry Blackstone Jr. to promote Oreo cookies.  It was a great experience and a highlight of my career. Just recently I received my 25 year tier award from the Society of American Magicians. Being a pro means working with agents, party planners and other entertainers. It is called “show business” for a reason.  To run a successful business you have to believe in what you do and be the best at it.  I have an award winning performance that is interactive and memorable. It is because of my strong work ethic and integrity that I have been able to create both a great business and a service that people want at their events. Whether it is a public event for a thousand people or a private party for 15 I give my clients quality and value.

AXS: How did you get into Long Island Parks?

Amore: I started working for the NYS parks back in the 90s. Originally booked to perform for a park staff event I was discovered by one of the park officials.  This has turned into years of working with the fantastic park staff and performing at the beautiful state parks.   All of my shows for the parks are open to whoever wants to come and see.  I visit the many different parks each summer and fall season and always put together a show that the park visitors love.

AXS: Do you ever ask audience members to partake? If so what has been the most memorable reaction?

Amore:  Although there is no one specific memorable reaction per se;  If it was just one overall reaction I have to say the smiles.  Each of my shows is layered with comedy, illusion and pure magical moments.  I strive for reactions every time I start a routine.  My shows have always used audience participation–now more than ever. I believe a magic show should be three dimensional in the idea that you involve the audience. It is one thing to watch a show and another to be in it.  Participation makes the show more memorable and there is nothing better than that.

AXS: Thus far, what has been the best part of working in the entertainment industry?

Amore: Performing is a dream come true. I consider myself very lucky to have discovered magic and the people who have helped me learn and become who I am. Traveling to distant places and seeing different cultures has a strong place in my memories but the best part is seeing people having fun and allowing themselves to suspend time, space and belief for a moment and become wonderment.

AXS: Career wise, where do you see yourself in ten years?

Amore: In the field of magic and entertainment you never know where things might take you. I have a few magical things up my sleeve so stay tuned. One thing I know for sure is life is a learning experience the day you stop learning, exploring and discovering is the day you perish.

AXS: Do you have any upcoming projects that you would like to mention?

AXS: What advice would you give to someone who is aspiring to enter the theater industry, especially as a magician?

Amore: Read, research, discover.  Know your ambitions, dreams and goals.  Don’t be afraid to detour from them. Be prepared for when opportunity calls and take the challenge. Talk to as many people in your field of interest as you can. Become a well-rounded performer by exposing yourself to many different art forms–the more knowledge you have the better you will be to call on it when needed. It all builds character. A lot of what you will learn will come from the school of hard knocks. Don’t do it alone get a mentor! If you are persistent you can find someone that can make that school of hard knocks a bit easier. 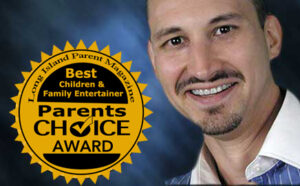